You have replaced the battery for your hard wired smoke alarm, yet it keeps beeping. This happens if the battery gave low battery warning beeps prior to replacing the battery or even with scheduled replacement.

You have searched online for the manual but can’t find it. If you did, you realise this  scenario is not covered.

It appears the solution lies in cancelling a persistent low battery status. Most devices are power cycled when a battery, its only power source is removed and replaced, not so for a device still connected to the mains power.

So to enact this solution you will need access to the switch for the circuit on which your smoke alarm lies in the distribution box.

Steps in the following order worked for me.

Battery out
Main Power switch off
It will still keep beeping (must be a capacitor in the power train). Wait till it feebly beeps till it dies.
Wait a little longer- about 5 minutes.
Replace battery – will beep on lid going into place.
Turn on mains power
Give a good vacuum of the device while there, if you can.

If this doesn’t work, and you’ve tried many other attempts to solve it, it is important to keep in mind that:

2)It may still be an ionisation type detector (usually has a radiation warning symbol on it) which is not the preferred type. Photoelectric detectors are preferred – another good reason to replace it.

Hope this works for you – let me know in the comments if it did.

Unfortunately I cannot claim credit for this really simple and easily performed fix.

I found it on an old forum thread. (Original forum thread on How to Mend It: http://www.howtomendit.com/answers.php?id=199139)

All the links to the explanatory pictures posted over the years no longer work.

From reading the descriptions I pieced it together. Not that that was too difficult, but there is no standard way to explain oven door hinges!

The reason the problem comes about is because either the springs tension in the hinges to keep it closed are no longer good enough , or the lip (this lip will become more apparently shortly) on which the arms of the hinge that extend into the oven rests, wears down with use.

While what I am about to describe works on Smeg oven doors, this fix apparently works for other brands of doors (such as Ilve) which have a similar mechanism.

1)Open fully. All the way down! Undo small levers (catches) between the arms on both sides. If they will not unhook, gently push down on the door a bit and see if that helps.

And the problem he has with the door at the beginning of the video (0:08) is the one this will fix.

Fold the foil in half repeatedly until its about 6-8 layers thick.

Cut this into two strips about a centimeter long and just wide enough to fit into the width of the opening into which the hinge arms of the door go on the oven.

Fold in half and place over the metal lip at the lower end of the opening on the oven. Press it down snugly with a tool so that it seats well and will not be easily dislodged.

Repeat for the other side.

Replace the door. The little notch on the lower arm of the hinge on the door (2:46 in the video)  fits/rests over the metal lip in the oven opening.

The idea is that there will now be multiple layers of tinfoil between the notch and the lip like this. 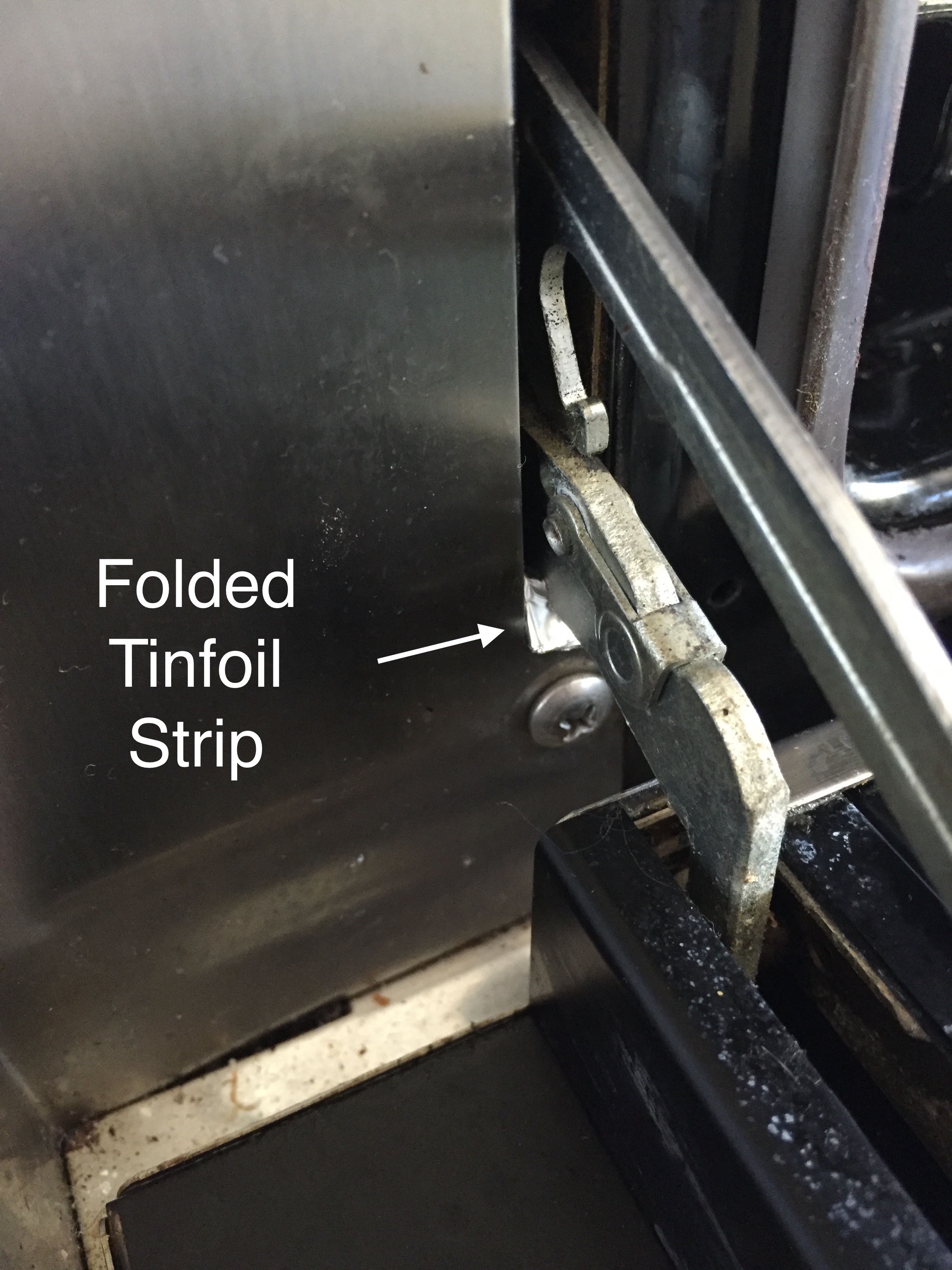 Don’t forget to close the levers (“catches” in the video). If the little levers won’t engage fully into the locked position, make sure the door is fully open (3:10 in the vid). I had this issue.

If this fix doesn’t work because your hinges are truly broken and not just slowly failing, it appears that replacing them is not too difficult if you have the spare parts. I might need to do this in the future.

You may need to uninstall the VPN client. Luckily I no longer needed it.
And if you uninstall, its best to use the uninstaller that came with the client.

I hade Checkpoint / Securepoint installed. I could not see the NAS via its setup client.
This did my head in until I saw a post about someone who found his VPN client interfering. Removed mine. No luck. Realised there were Launchagents still doing things in the background via error logs.
Used the uninstaller that came with the checkpoint/securepoint and now it works just fine. Hope this helps someone out there. This may problem may reveal itself as a timemachine backup that wont work after installing the VPN client. I bet the timemachine target is on a NAS!

Over the last year, while studying, I noticed there is a marked difference in my ability to concentrate for long periods, without distraction, on study material. When at university,  I can recall completing sessions in excess 90 minutes quite easily. These days I struggle to hit two pomodoro successively without a distraction. And major ones at that.

I have surmised that modern technology and the internet has a part to play. After all, at university I didn’t have a internet connected device in my pocket. I had to walk over to the the computer lab. (We were so jealous of the computer science “nerds” who had connections in their residence rooms.)  In the last few months I have come across a few articles where this was mentioned in passing. Today, purely by chance I happened to see an interview with William Powers at the recent  Melbourne Writer’s festival. And he just made sense. He has authored “Hamlet’s Blackberry” in which he describes the role of technology and how it has changed us. And one item he did mention, was this new inability to maintain a sufficient attention span.

As further food for thought he showed this advertismenet from a major Thai telecommunications company. It speaks for itself.

He also related a type of technology sabbath , that he and his family has practiced for 4 years already, whereby the family turns off their modem for the weekend on a friday evening. I wonder how I would cope 😉

Both the full interview and a highlights packgee can be found here: ABC’s “Big Ideas”

My ageing macbook didn’t quite like the upgrade to Lion. Addittionally, the fact that rosetta is no longer supported is rather crucial when you have a specific piece of hardware that uses custom PowerPc software to run. Yes it may be old but, in my case, that would require replacement of a specific niche bit of hardware.

As long as you have a Snow leopard boot DVD and a time machine backup of your mac pre Lion installation, its actually quite easy.

On would assume you made a time machine backup just before upgrading to Lion?

Place the boot disc into the drive, restart and Press “C” during bootup to get the DVD to be the boot drive. Afterbooting up, before confirming a clean SL install it will prompt you for a restore from a time machine backup. Follow the instructions by reaching for the utilities tab in the menu’s.

After ensuring the time machine drive is connected you will be offered multiple restoration points. Luckily the version number of the OS is indicated. So choosing the last 10.6 version would have you selecting a snow leopard restore.

A few clicks further and a serious bit of a wait, and its all done.

She’s running much smoother again and I have my legacy apps.

With the Mendeley desktop installed you will find that an attempt to install the citation plugin for OpenOffice on your copy of LibreOffice will fail through the usual route of Tools>Install OpenOffice plugin. The prompted “manual” install alternative does not work either.

The way to get this to work in LibreOffice is to open the appropriate Mendeley supplied *.oxt (plugin file) with Libreoffice.

Basically its a manual install of the plugin .oxt file by LibreOffice. Too easy.

Me doing a security type post, here’s a first…Some of you will repost this, others won’t. No scaremongering here. Realistically, not enabling https access may not affect you at all, but if you use an unencrypted wi-fi access for FB, then you definitely should be. (Does anyone still have a non WPA2 encrypted home wi-fi network? I so so hope not!)

I am not going to get technical. Lets just say that gmail implemented it as default a few months back. I remember Charl B pointing out this issue with regards to gmail nearly 16 months ago and the opt in solution . Then they made it default a few months later.  Most gmail users probably never even noticed the change. It made no difference to the performance.

On facebook its still opt in however, not default, a year later!

https is the encrypted protocol that banks use for communication when you do your banking. You know, “the lock” at the bottom of your browser?
Firesheep is an add-on that runs in firefox that allows someone on the same unencrypted wi-fi network as you to basically log in as you to sites that don’t use https for the whole session. Before this, “sidejacking” was a bit more difficult.

Aston Kutcher, while at TED (TED is awesomeness!) must have used unencrypted wi-fi without https on his twitter and got firesheeped.
more background here:
Someone in DC cares about online security

It makes sense to turn it on. If it gives you hassles, turn it off. If you use unencrypted wifi bear with it!

If you use firefox and facebook, you may notice (or may not actually) that the navigation buttons and added functionality options by way of “buttons” dont show up. These are the Nav buttons next to the facebook logo for Friend requests, messages and notifications. Then the button for settings on posts on your wall and even the forward and back buttons for the photos.

To get these back, while you have  facebook up, just

(Source: A helpful post in the FB forums from M.Delhie)

A mouse is connected and I am not using the built in track pad on my macbook. Occasionally while typing I inadvertently touch the trackpad, the cursor moves to some random spot in my typing without me noticing and the new input is somewhere between everything else.

Going to the Trackpad tab in System Preferences has the Ignore accidental trackpad input box checked, but makes no difference for me.

The answer is to go to Mouse and track pad under Universal Access in System preferences. Click Ignore built in track pad when mouse is present.

It would be better if the previous solution actually worked as advertised (am I missing something here?) But this solution is the best I have found.

If you have your inbox open and wish to select all the emails listed on the page for an action (like delete), you may find that the option of clicking the first , while holding down shift and clicking the last email in a range, to select all intervening entries, will not work if you are using firefox/chrome on a mac.

If the ability to consecutively select is not available, no matter what combination of OS or browser you are using, just copy

into the browser address bar and hit enter. This will select all the messages. Then hit delete/move, whatever.

I was tying to clean out a few hundred emails spanning a year and clicking each one individually was not going to be the answer, till I found this.